Get fresh music recommendations delivered to your inbox every Friday.
We've updated our Terms of Use. You can review the changes here.

They didn't come home until morning 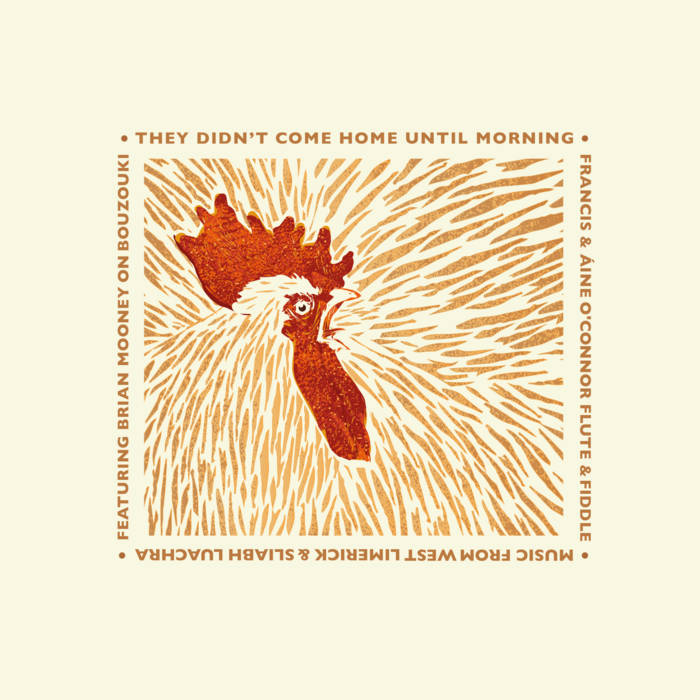 Louisa Bennion I've been binge-listening this album since I bought it a few weeks ago. The warmth and expressiveness of this musical conversation has me completely charmed...

Áine O’ Connor (nee O’Connell) originally comes from Cill na Martra, near Macroom, Co. Cork. Áine is the only daughter of the noted fiddle player Connie O’ Connell, who taught her the fiddle from the age of 12. Áine plays in a distinctive Sliabh Luachra style.

Francis O’ Connor originally comes from Ardagh Co. Limerick. He is a renowned concert flute player and an accomplished fiddle player as well. Francis plays in a typical West Limerick style .Francis is also a great composer and has in an excess of fifty tunes of all genres, composed to date.

This debut album looks at two great examples of duet playing that have greatly influenced Áine and Francis. The first duet being Connie O’Connell (father of Áine) and Denis Mc Mahon from Sliabh Luachra, and the second being Moss Murphy and John Joe Harnett from West Limerick. Through this album, it is hoped to revive some of the great selections of tunes that these particular duets played. Some of the tunes have unusual settings, some have extra parts and indeed, some of the tunes are in danger of being forgotten. Also included on this album, are some of the many great tunes that Francis has composed, in the hope that they will be played, shared and enjoyed by musicians both in Ireland and abroad.
Francis and Áine have been playing together as a duet, for well over twenty years. Their music is a fusion of both a West Limerick and a Sliabh Luachra style. On this debut album, Francis and Áine are accompanied by maestro bouzouki player, Brian Mooney, who hails from Brosna , Co. Kerry.

On this recording, we have what could be described as a musical
conversation with generations long gone. But we also have a new
conversation, because we have here a delicate and true reflection of
what’s at the heart of the ever-turning wheel of our music, a divining and
drilling to its core.
Flute, fiddle, names like O’ Connor and O’ Connell are cornerstones of a
great musical tradition. Francis and Áine are proud keepers of musical
memory, displaying a deep understanding and respect for what has gone
before, which reflects their own musical nurturing and homeplace. Theirs
is a strong musical accent that has been handed down by great players
like John Joe Harnett, Moss Murphy, Denis Mc Mahon, Connie O ‘Connell,
Donal O’ Sullivan.
Wherever in the world you are listening to this, you will be transported to
the wild, rugged landscape of South West Ireland and to between the
hedgerows of West Limerick and West Cork.
Ní ceol cliste nó úisleacht bréaga é seo.
This is honest music, some of the strong stuff.
Francis and Áine, to write in your praise is an honour.
Noel Hill.
15th of November 2019.

Bandcamp Daily  your guide to the world of Bandcamp